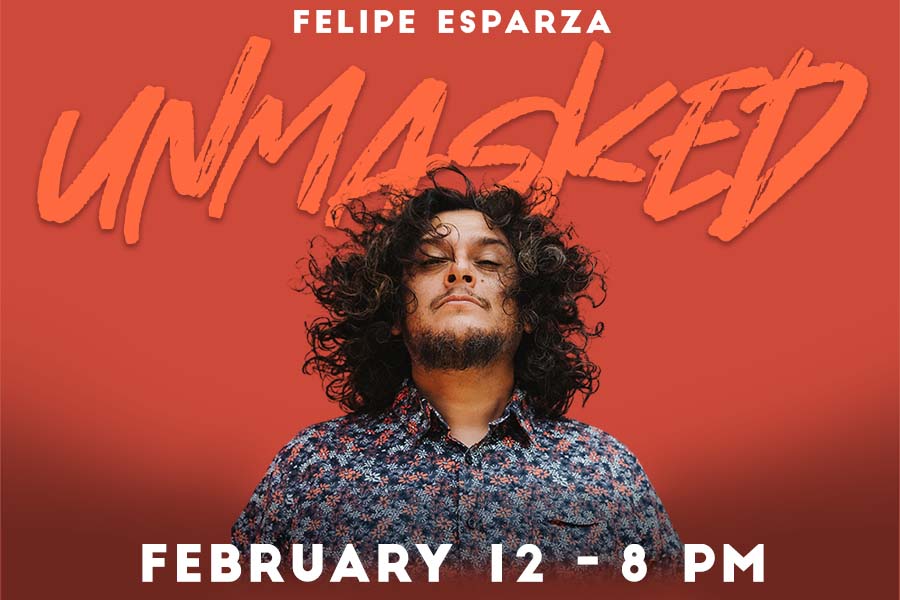 Actor and Last Comic Standing Winner Felipe Esparza will be taking the stage at the Rialto Square Theatre February 12, 2022 at 8pm for a night of laughter and stories.

Felipe started his career all because someone asked him to list his five goals in life, which included “to be happy” and “be a stand-up comedian.” After a short stint in rehab before he was 21, he worked for years as a stand-up comedian, opening on the road for fellow comedians such as Gabriel Iglesias and Paul Rodriguez. He then took a leap of faith and went out on his own, which led to very little income and opportunity at first.
His “overnight success” of winning Last Comic Standing allowed Felipe to produce his first stand-up comedy special, “They’re Not Gonna Laugh at You” (now on Netflix). He also has made several appearances TV appearances on “The Eric Andre Show: and NBC’s “Superstore”.

In addition to his live stand-up, Felipe hosts a weekly podcast on the All Things Comedy Network called “What’s Up Fool?” that focuses on interesting stories from just about anybody. From Father Greg Boyle from Homeboy Industries, to actor Emilio Rivera (from Sons of Anarchy) to even the “Incredible Hulk” who takes photos with tourist on Hollywood Blvd., Felipe believes everyone has a story to tell about how they got where they are, no matter who they are.

In 2017, Felipe and his wife self-financed and self-produced his second one‐hour stand‐up special, entitled “Translate This”, which they licensed to HBO. His latest stand-up special was released September, 2020 on Netflix as a dual release – one special performed in English (“Bad Decisions”) and one performed in Spanish (“Malas Decisiones”). Felipe is also currently developing a sitcom with actor Omar Chaparro, producer Eric Tannenbaum and 3Pas (Eugenio Derbez’s production company).

VIP Packages Include:
Meet and Greet After the show
Photo Opportunity with Felipe Esparza
“Unmasked” Tour Laminate and Lanyard