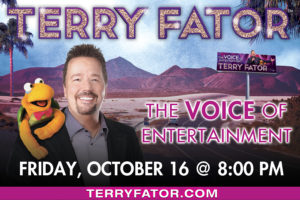 It’s a long journey from Corsicana Texas to the Las Vegas stage, but Terry Fator made it to the top as the headliner at the Mirage Hotel in Vegas for the past 10 years. Terry can impersonate over 100 voices with favorites being Karen Carpenter, Elton John, Garth Brooks, Justin Timberlake, Elvis, Meghan Trainor and Bruno Mars. His cast of characters includes: Winston the Impersonating Turtle; the World’s Greatest Elvis Impersonator; Elton John; Vicki the Cougar; President Donald Trump and annoying neighbor Duggie. But even with all his time performing, he always finds time to enjoy life with his beautiful wife Angie and to give of his time to the cause he passionately believes in, helping America’s veterans.