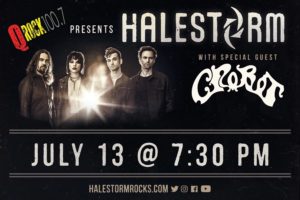 This morning, hard rock band Halestorm announced the addition of Rialto Square Theatre to their tour lineup. Halestorm with special guest Crobot will be taking the Rialto stage Monday, July 13, 2020 at 7:30pm. Tickets go on-sale this Friday, February 21, at 10:00am.

About Halestorm
Since their inception in 1998, Halestorm have toured extensively with a diverse variety of artists, including Eric Church, Joan Jett, Avenged Sevenfold, Alice Cooper, Rob Zombie, ZZ Top and Evanescence. They’ve played around 2,500 dates around the world to date, and performed at festivals like Taste of Chaos and Rockstar Energy Drink Uproar Festival. Most recently, the band scored a 2019 Grammy nomination for “Best Rock Performance” for “Uncomfortable,” marking their second after their 2013 win for “Best Hard Rock/Metal Performance.” Loudwire named Lzzy (Halestorm frontwoman) their “2018 Rock Artist of the Year,” last year, and two years prior, she was named the “Dimebag Darrell Shredder of the Year” at the Metal Hammer Golden Gods Awards. Both Halestorm and The Strange Case of… were certified Gold, further evidencing Halestorm’s massively supportive fanbase. Halestorm have also made history: “Love Bites (So Do I),” the hit single from The Strange Case of… ascended to No. 1 at Active Rock radio in the U.S., making Halestorm the first-ever female-fronted group to earn the top spot on the format.