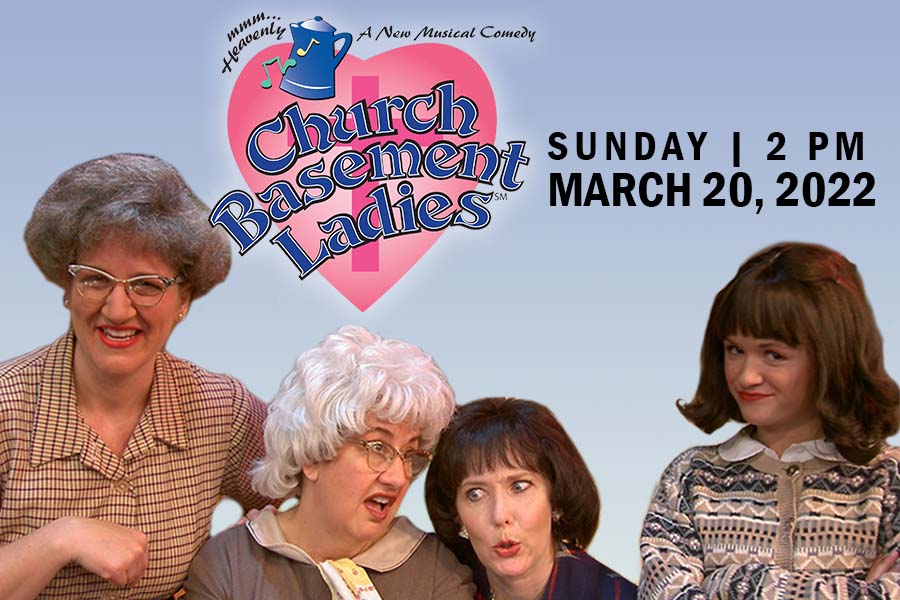 CHURCH BASEMENT LADIES, a celebration of the church basement kitchen and the women who work there, will make its return to the Rialto Square Theatre stage on March 20, 2022 at 2:00 PM.

This beloved show features four distinct characters and their relationships as they organize the food and the problems of a rural Minnesota church. From the elderly matriarch of the kitchen to the young bride-to-be learning the proper order of things, the book and music give us a touching, funny look at their lives as we see them handle a record-breaking Christmas dinner, the funeral of a dear friend, a Hawaiian Easter Fundraiser, and a steaming hot July wedding. They stave off potential disasters, share and debate recipes, instruct the young, and keep the Pastor on due course while thoroughly enjoying, (and tolerating) each other. Funny and down to earth, audiences will recognize these ladies as they begin to see the Church year unfold from below the House of God. This is most certainly true!

Authors/humorists Janet Letnes Martin and Suzann Nelson the creators of the best-selling book Growing Up Lutheran and a host of other humorous writings have joined forces with Twin Cities based production company Troupe America, Inc. and its Executive Producer Curt Wollan to turn their material into a beloved musical comedy, CHURCH BASEMENT LADIES. It was a love affair in the making originally inspired by a conversation with Wollan’s in-laws suggesting that he talk with Martin and Nelson about the idea of turning their material into a musical comedy. Wollan wanted to create a show that celebrates the women who work so hard and with such dedication in the church kitchen whether they be Lutheran, Methodist, Jewish or Catholic. Wollan explained, “I know about these “Steel Magnolias” of the church, because my mother was one of them while I was growing up.” Intrigued by the idea, Martin and Nelson agreed to meet.

Wollan commissioned creative writing team Jim Stowell, one of Minnesota’s favorite storytellers and Jessica Zuehlke, a performance arts educator and also the daughter of a Church Basement Lady, to develop the book. This husband and wife duo collaborated with composer/ songwriter Drew Jansen, well-known for his creation of the music for the popular homegrown hit musical, How To Talk Minnesotan The Musical, Directed by Wollan, the inspiration is found in his mother who was a well-respected church kitchen lady who’s Church named their new stove in her honor. CHURCH BASEMENT LADIES is choreographed by Wendy Short Hays, with set design, and lighting design by Scott Herbst, costume design by Katrina Benedict and musical direction by Drew Jansen.

100 percent Norwegian-American Lutheran, Martin and Nelson bill themselves as authors and humorists and together or individually are in high demand as speakers/performers throughout the country. Martin grew up on a farm near Hillsboro, North Dakota and now resides in Hastings, Minnesota and Nelson, originally from Evansville, Minnesota, lives in Grand Rapids, Minnesota. The two met in 1964 during Freshman Week at Augsburg College in Minneapolis and became lifetime friends and partners in writing. Together they have co-authored and published a number of Scandinavian-American “heartwarming humor” books over the past ten years– nine to be exact, beginning in 1994 with Cream Peas on? They are best-known for their book Growing Up Lutheran: What Does This Mean? which became a national bestseller and won them the 1998 Minnesota Book Award for Humor.