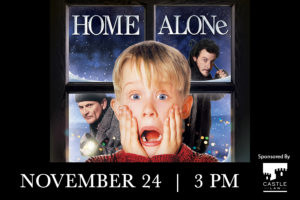 HOME ALONE will be shown as part of the Home for the Holidays celebration at the Rialto Square Theatre on Friday, November 24, 2017 at 3:00 pm. This movie is being sponsored by Castle Law.

This matinee features bratty 8-year-old Kevin McCallister (Macaulay Culkin) acting out the night before a family trip to Paris, his mother makes him sleep in the attic. After the McCallisters mistakenly leave for the airport without Kevin, he awakens to an empty house and assumes his wish to have no family has come true. But his excitement sours when he realizes that two con men (Joe Pesci, Daniel Stern) plan to rob the McCallister residence, and that he alone must protect the family home.
The film also features Catherine O’Hara and John Heard as Kevin’s parents.

Culkin was nominated for the Golden Globe Award for Best Actor – Musical or Comedy. It is the highest grossing Christmas movie of all time at the North American box office. Home Alone has spawned a successful film franchise with four sequels, including the 1992 film Home Alone 2: Lost in New York, the only Home Alone sequel to have the original cast reprising their roles. Experience the magic with this classic Christmas movie.