HOME FOR THE HOLIDAYS MOVIE – DR. SEUSS’ HOW THE GRINCH STOLE CHRISTMAS 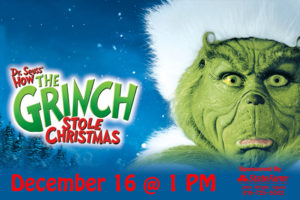 DR. SEUSS’ HOW THE GRINCH STOLE CHRISTMAS will be shown as part of the Home for the Holidays celebration at the Rialto Square Theatre on Saturday, December 16, 2017 at 1:00 pm. This movie is being sponsored by State Farm Agent John Wright.

In this live-action adaptation of the beloved children’s tale by Dr. Seuss, the reclusive green Grinch (Jim Carrey) decides to ruin Christmas for the cheery citizens of Whoville. Reluctantly joined by his hapless dog, Max, the Grinch comes down from his mountaintop home and sneaks into town to swipe everything holiday-related from the Whos. However, the bitter grump finds a hitch in his plans when he encounters the endearing Cindy Lou Who (Taylor Momsen).

This 2000 American Christmas comedy film was directed by Ron Howard and written by Jeffrey Price and Peter S. Seaman based on the 1957 story of the same name by Dr. Seuss. It was the first Dr. Seuss book to be adapted into a full-length feature film. The film was a box office success, grossing $260 million in the United States and over $345 million worldwide, becoming the second highest-grossing holiday film of all time, with Home Alone being the first. Experience the magic with this classic Christmas movie.