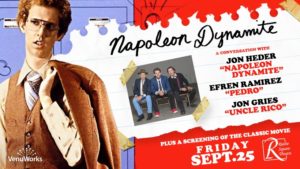 It was announced this morning that the hit cult movie “Napoleon Dynamite” will be shown at Rialto Square Theatre on September 25, 2020, including a conversation with three of the actors afterwards.

Much has changed since the beloved indie classic “Napoleon Dynamite” was made almost 15 years ago, but the characters, as enduring as they are endearing, stay in our hearts. Appealing to the inner-teenager in each of us, the story, and more importantly the dialogue, makes “Napoleon Dynamite” one of the most quoted movies of our time. “Napoleon Dynamite” makes us laugh – and laugh hard – over and over again.

Napoleon Dynamite is a socially awkward 16-year-old from Preston, Idaho, who lives with his grandmother and his older brother. The film centers around Napoleon’s high school’s race for class president, where Napoleon is determined to help his friend Pedro beat popular girl Summer. In addition to navigating his high school life, Napoleon must also face the strange family dynamics back home.