Comedian KEVIN JAMES will entertain patrons at the Rialto Square Theatre with two performances on Nov. 5, 2021 at 7PM and 9:30PM 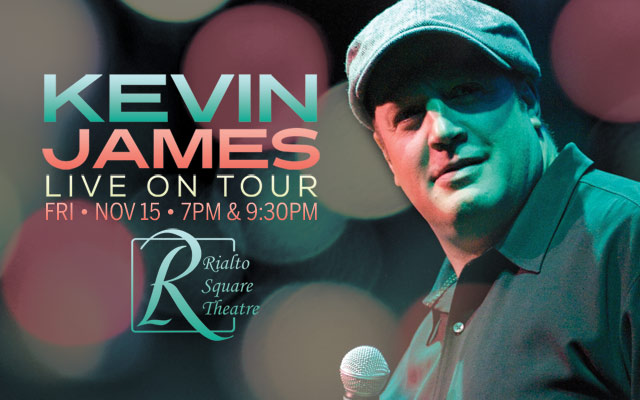 Due to overwhelming demand, a second performance of KEVIN JAMES has been added at the Rialto Square Theatre on Friday, November 5, 2021 at 9:30 pm.

The King of Queens, which premiered in 1998, ran for nine seasons on CBS with James starring and executive producing, and it garnered him an Emmy nomination in 2006 for Outstanding Lead Actor in a Comedy Series. The show concluded its run in 2007 but continues to air daily in syndication across the country and around the world. James is currently starring in and executive producing the new sitcom The Crew, set in the world of NASCAR on Netflix. In 2001, James brought his stand-up act to TV with Sweat the Small Stuff, a one-hour special for Comedy Central. In 2005, Kevin James and Ray Romano executive produced and starred in the HBO Sports Special Making the Cut: The Road to Pebble Beach; a documentary about the Pebble Beach Pro Am Golf Tournament that was nominated for a Sports Emmy. His second comedy special Never Don’t Give Up premiered on Netflix in April 2018.

Tickets On Sale Now for Both Shows