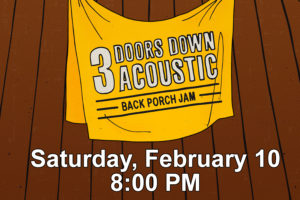 3 Doors Down plans to stage the “Back Porch Jam” Tour, an acoustic interpretation of the band’s hits, fan favorites and deep album cuts. All ticket purchasers will receive a limited-edition digital EP featuring acoustic performances of “Kryptonite,” “It’s Not My Time,” and “I Don’t Want To Know.” The VIP pre-sale will begin on Tuesday, October 24 via www.3DoorsDown.com with a general on-sale to follow on Friday, October 27.