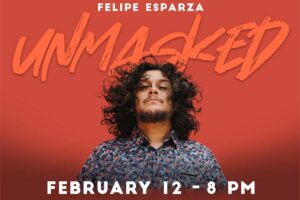 Actor and Last Comic Standing Winner Felipe Esparza started his career all because someone asked him to list his five goals in life, which included “to be happy” and “be a stand-up comedian.” After a short stint in rehab before he was 21, he worked for years as a stand-up comedian, opening on the road for fellow comedians such as Gabriel Iglesias and Paul Rodriguez. He then took a leap of faith and went out on his own, which led to very little income and opportunity at first.