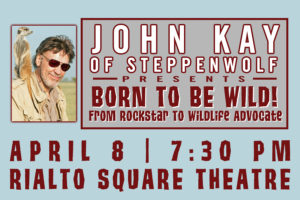 It was announced this morning that John Kay, founder and lead singer of Steppenwolf, will be  speaking and performing at Rialto Square Theatre on April 8, 2020. John will discuss his journey from that of a Rockstar to wildlife advocate, followed by a 40-minute solo acoustic show.

This journey of transformation is John Kay’s inspirational speaking/multi-media historical trip through the riveting story of Steppenwolf the band – leading up to present day; John Kay the aweinspiring environmental/animal rights crusader. John was born in East Prussia behind the Iron Curtain, where he lived until him and his mother escaped to West Germany. He grew up listening to American rock ‘n’ roll heard on the U.S. Armed Forces Radio, which sparked his love for the genre. In 1958 he immigrated to Canada where he eventually joined the band The Sparrows. The band grew in popularity and made its way to LA’s Sunset Strip, where John formed Steppenwolf in 1967. Since then, John has been the front man of the “Born to Be Wild” band, throughout all its changes. In 2004, John and his wife Jutta created the Maue Kay Foundation. John now spends most of his time working at the Foundation on wildlife conservation and human rights projects, and performs a limited number of concerts with Steppenwolf each year.