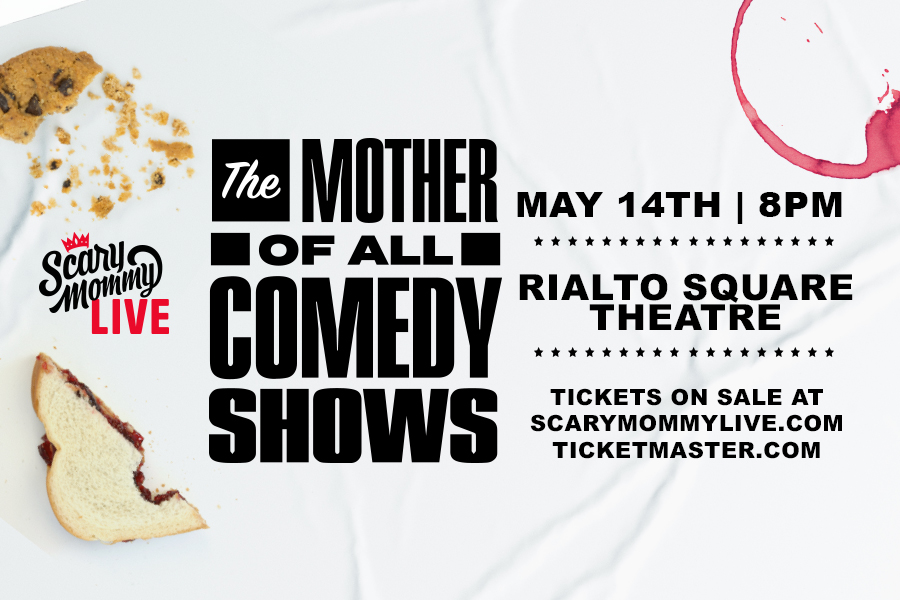 Scary Mommy’s millions of fans are brought together by the common theme that parenting doesn’t need to be perfect, and it is bringing its online community to the local community with a live show. Scary Mommy Live presents The Mother of All Comedy Shows Thursday, May 14th at the Rialto Square Theatre.

Featuring the brand’s honest and irreverent humor, Scary Mommy Live brings everything that millions of moms love about Scary Mommy’s online content to the stage. By speaking the unspoken truths about motherhood, Scary Mommies gain (and give) strength to each other and aren’t afraid to laugh at themselves.

The live show is designed to unite, entertain and uplift women and moms across the country through humor, compassion and empowerment. In addition to stand-up comedic sets, the live show will feature exclusive video content with cameos from the most popular Scary Mommy personalities.

Scary Mommy reaches millions of women daily with articles, original videos and its unique confessionals. According to comScore partner Shareablee, Scary Mommy garners by far the most total social actions (shares, comments, and likes) and the most social actions per post in the family category.

The talent lineup for this show is as follows:

Nicole Blaine
Nicole’s first stand-up special, Life’s A Bit, will be available on March 31, 2020. Nicole
has been seen on NBC’s The Today Show, E’s That Morning Show, SFSketchfest, Big Sky Comedy Festival, The International FringeNYC Festival, Laughing Skull Comedy Festival and the Women in Comedy Festival. Nicole has been a regular contributing writer to the online magazine, Real Mom Daily, since its inception. You can see her perform every Monday night at the Kibitz Room Comedy Show at Canter’s Deli in Los Angeles. She enjoys producing and hosting the weekly show. LA Weekly describes her as “a remarkable performer with brains, beauty and rich comic delivery” and her honest (and crass) observations showcase her “humor, passion, dazzling charm and a naturalness that many performers, or even civilians, would kill for.” (Backstage West) She lives in Santa Monica with her husband and two kids. They all suck so she has great material.

Tacarra Williams
Tacarra Williams hails from the Bronx, NY. Known to many in comedy circles as at The Beautiful Beast, Tacarra brings the laughs by drawing on her rough life as a twin and sibling to six others and by daring to be a voice for every woman too afraid to think aloud. She has hit major stand-up stages in New York and Hollywood including Carolines on Broadway, Broadway Comedy Club, The Apollo Theatre, Hollywood Improv, The Comedy Store and The Laugh Factory. She also has her on 30 min special on Comedy Central.

Tim Krompier
Comedian Tim Krompier has been entertaining audiences in New York City and all across the country with his original autobiographical style of comedy for several years now. Tim has the sly grin and rage of a 30-something rabid frat boy and the dryness of the exhausted father of three. Pay attention and underneath his devastatingly good looks (his wife told him to write that) and hilarious mockery of marriage, family, and the world around him, lives a little boy who just wants to cuddle. In addition to performing stand up on a nightly basis, Tim is now an executive producer of morning shows services for Premiere Radio a subsidiary of iHeartmedia. You can hear his writing and his voice work on stations from New York to L.A. and even Canada. As you can see Tim is no one trick joke pony. Adding to his performance repertoire over the last several years Tim has become one of the premiere host/moderators in the country after teaming up with Mills Entertainment for their very successful “Back Lot Project”. Tim was recently featured on the MSG Network’s “The Bracket” giving his witty and educated comments on New York sports. He was also featured doing stand-up on AXS TV’s Live at Gotham, and the prestigious Montreal Just For Laughs Comedy Festival. Tim headlines at clubs across the US and Canada and continues to be in high demand for private and corporate events

Tickets for moms, parents, and those that love them will go on sale on Friday, February 28th at 10AM at the Rialto Square box office and online at ScaryMommyLive.com and Ticketmaster.com.