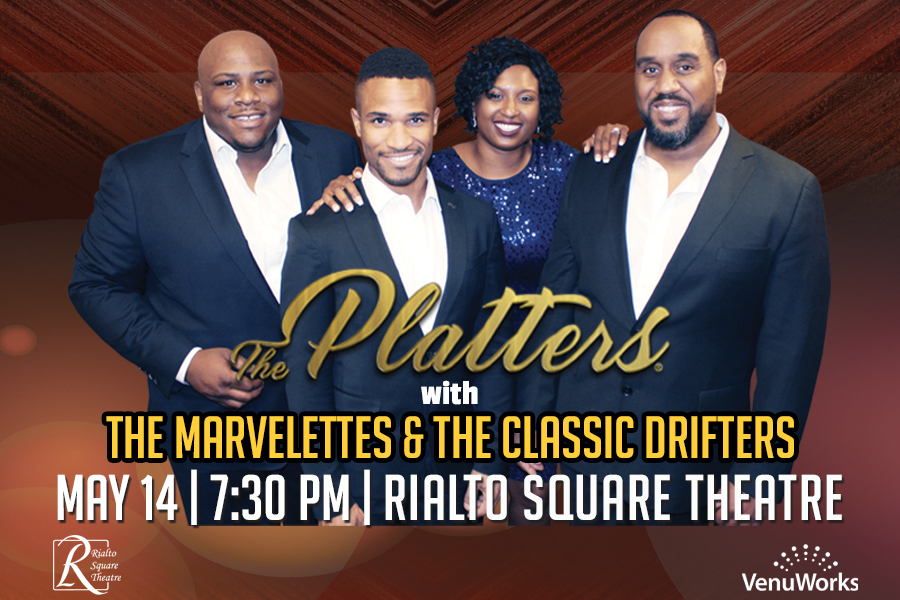 In 1955, the vocal group debuted on the national music charts with “Only You (And You Alone)” soon after Tony Williams, Paul Robi, David Lynch, and Zola Taylor replaced original members Joe Jefferson, Cornell Gunter (who would later form The Coasters), and Alex Hodge.

The music that comprises the foundation of this vocal powerhouse is as relevant and unwavering today as it was in its inception. The classic hit “Twilight Time” is currently being broadcast internationally as a prominent part of a PlayStation Now® radio, TV, and online commercial that introduces them to younger generations of music consumers. In major motion pictures such as “The Curious Case of Benjamin Button,” leading to the nomination of “My Prayer” for the coveted Oscar® as part of the movie soundtrack. On television, the “Great Pretender” prominently appears in a pivotal scene on Fox Television’s Golden Globe®, Emmy Award® winning hit drama “Empire.”

Today The Platters continue to open the hearts and minds of new generations of music lovers. There’s something for everyone in The Platters uplifting stage show that takes the audience through time with musical director Michael Larson and his band.

The legendary vocal group is in the process of recording their first LP in more than 50 years featuring new music scheduled for release in the spring of 2020!

The rich vocal and historical tradition that is The Platters is unmistakable, making their timeless melodies relevant to fans all over the world!

The Marvelettes were the first major successful act of Motown. Their single “Mr. Postman” — released in 1961 — was the first number one release by a Motown act.

As a girl group, they initially achieved popularity in the early to mid ‘60’s.

Their hit ‘Don’t Mess with Bill”, along with “Mr. Postman” earned million-selling Gold singles from the RIAA.

Other hits include: “Too Many Fish In The Sea”, My Baby Must Be A Magician”, The Hunter Gets Captured By The Game” and “Beechwood 45789”. Their catalogue of hits is quite expansive.

The group has several honors including induction into the Vocal Group Hall of Fame, and have received the Pioneer Award from the Rhythm and Blues Foundation in 2005. On August 17,2013 The Marvelettes were inducted into the 1s​t​ class of the Official Rhythm & Blues Music Hall of Fame in Cleveland, Ohio. In June 2017, the ceremonial aspect of this induction was repeated in Detroit, where Motown was founded.

The legacy of The Marvelous Marvelettes continues with original member Katherine “Kat” Anderson Schaffner. After 50 years, she has returned to the stage. She gained all rights to The Marvelettes Trademark, after winning a court battle. Kat recruited members; Delores “Lady Dee” Harris, Brenda Michelle Chatman and Jaki “Lady J” Gilliard-Fondren to perform as “The Marvelettes with Original Member, Katherine Anderson Schaffner”! They collectively have over 180 years of experience in the field of music, both on stage and in recording.

Now, they introduce to some and revive memories for others, the world over, so that The Marvelettes will never be forgotten!

About The Classic Drifters

The Classic Drifters authentically recreate the original sound of the beloved group The Drifters’ legendary hits like “Save the Last Dance For Me,” and “Up on the Roof,” plus the timeless “Under the Boardwalk.” Several members of group performed around the world with the late Bill Pinkney, an original member of The Drifters. The Drifters were one of the first groups inducted into the Rock and Roll Hall of Fame in 1988. Don’t miss your chance to see this excellent tribute to The Drifters.

RAIN: A Tribute to the Beatles